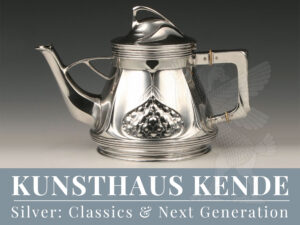 Standing on a circular base, the body divided in  four sections with abstracted ornamental branch and foliage to the long sides. The body terminating into a profiled collar and crowned by floral lid with a knob in the form of a tendril. The handle attached through heat stoppers to the body, the spout connected with ornamental branches to the body.

A beautiful and elegant Art Nouveau sterling silver teapot of sophisticated design and a very good gauge of silver. The teapot shows a significant proximity to the designs of Henry van de Velde. Very good condition without damages or repairs.

Some other comparable works made in  pewter, silver plate and solid silver by Orivit can be found in the possession of the Bröhan Museum, Berlin. See: Dedo von Kerssenbrock-Krosigk (ed.): Metallkunst der Moderne (Bestandskataloge des Bröhan-Museums VI) [Metal art of the modern age (stock catalogues of the Bröhan Museum VI)], Berlin 2001, p. 234-255.
A coffee and tea service on tray with proximity to the design of this teapot made by Orivit is also in the possession of the Rijksmuseum, Amsterdam (see here).

Click here to see our other current offers of tea services or coffee and tea services.
An overview of our Art Nouveau silver items can be found here. 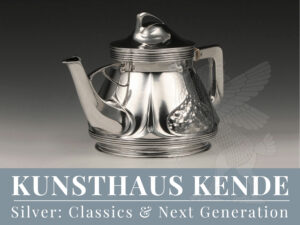 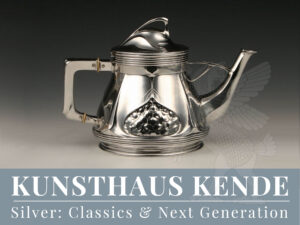 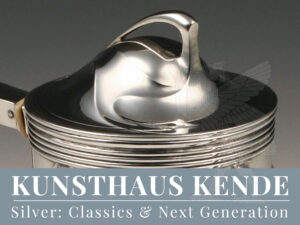