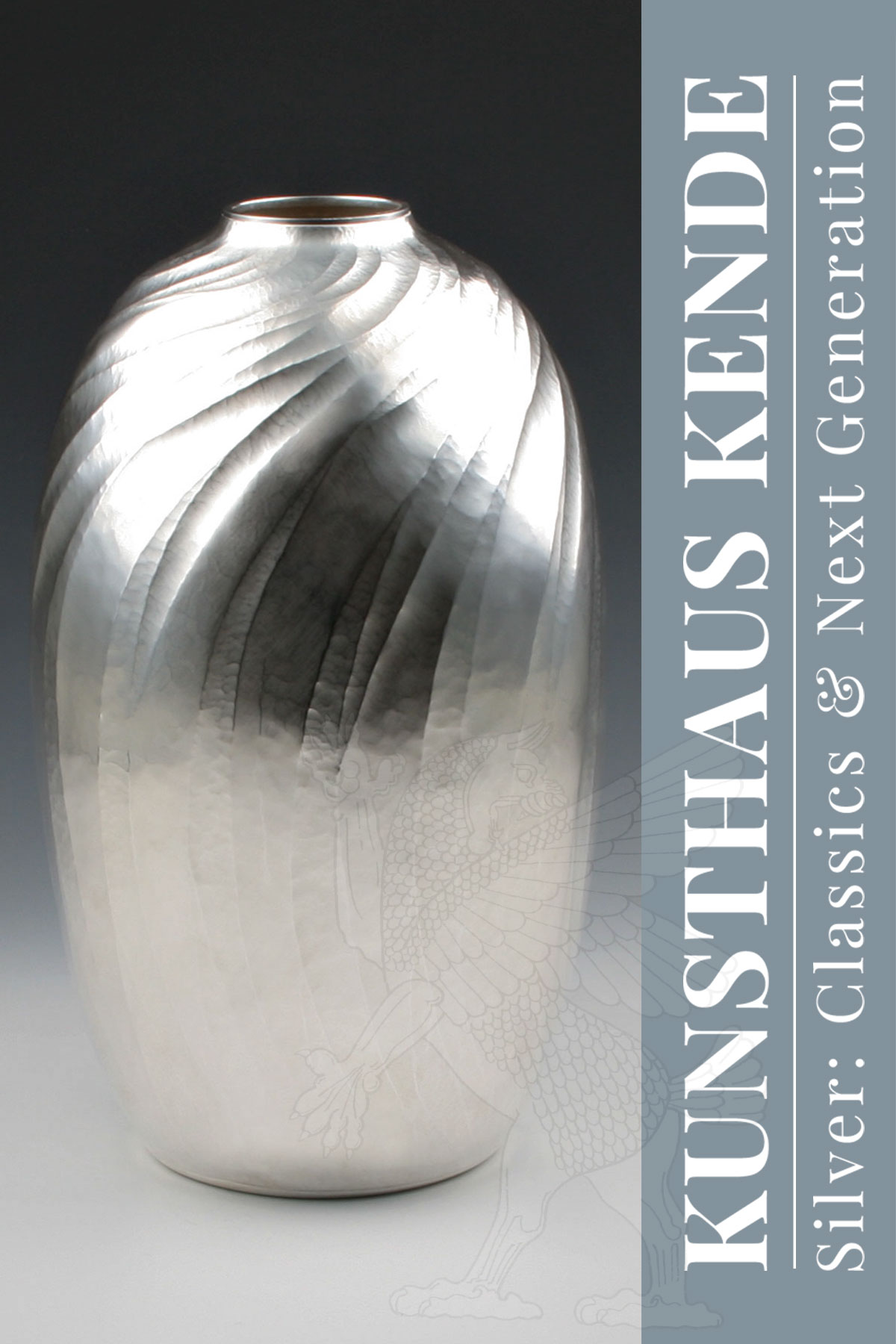 Standing on a flat base, the subtly curved and elongated body decorated with delicately crafted, flowing spiral decoration, merging into the slightly curved shoulder and terminated on top by a plain profile. On the underside, only visible by turning it over, there is an embedded bowl with gilded interior.
Highly elegant and very graceful designed vase which clearly illustrates the masterful skills of the executing artist silversmith in the use of different hammering techniques for the surface structure. Despite its impressive size and appearance, the object appears extraordinarily light, almost fragile.
The vase was shown in a special exhibition in the important gallery of Lord David Linley (the cousin of HRH Elizabeth II.) and Garrard’s (the first address in Great Britain as a jeweler, famous especially for the cut of the world-famous Koh-i-Noor for the British Royal Crown and holding the status of purveyor to the court still today).

Any other decoration is shown for illustrational purposes only and does not form part of the offer.

As one of the most important artist silversmith, Wayne Meeten has an exceptional position within contemporary British silversmithing and can only be compared in his importance to artists such as Gerald Benney.
Meeten studied at the renowned Sir John Cass School Of Art under Roy Albert Flewin. In 1997 he was the first and so far the only Western European to be invited to study at the University of Tokyo, which had a major influence on his life and work. The artist studied in Japan with the most important masters in their field, such as Professor Masanobu Kitoh (Master of Shibori hand raising) in Nagoya, Professor Norio Tamagawa (Master of Mokume-Gane ) in Nigata and Professor Hirotoshi Itoh at the Tokyo University of Fine Arts and Music. These teachers are world-class specialists in their respective fields and have been awarded the status of Living National Treasure, an honorary title in Japan reserved exclusively for the most important artists and teachers who are essential to national identity in their work. Under their aegis, he acquired not only this technical virtuosity which is his distinctive mark but also the way of thinking and working that are the basis of these ancient metalworking techniques. His silverworks therefore unite the Japanese ethos – simplicity, elegance, functionality paired with the highest level of craftsmanship.
After his return to Great Britain, he continued to put the acquired knowledge into practice as a student and founded his own workshop after graduating.

Wayne Meeten’s work reflects a deeply philosophical approach to working, in that he considers silver as a living material that, while it is worked, “shows” him how it wants to develop into a form. For this purpose, the artist uses the much harder Britannia Silver and creates artworks of outstanding beauty, harmony and a near breathtaking elegance. To list his awards and prizes would go beyond the scope of this website, which is why we mention only the Goldsmith’s Craft Council Award (which he has won even several times in a succession) or the Qest Scholarship Queen Elisabeth Award as two examples. Wayne Meeten has also been awarded the high distinction of being a full member of the IPG (Institute of Professional Goldsmiths). The IPG is an association of the UK’s finest precious metalworking craftsmen and artists and currently has 90 members among these are only three (!) silversmiths. Members of the IPG only are allowed to use the IPG hallmark on their work, which is subject to a number of strict rules, including the requirement that the artwork must have been made in their own workshops by themselves. The IPG hallmark is an internationally recognised guarantee mark of origin and quality and is applied exclusively to the best works of IPG members.
This silver vase bears this hallmark as might be expected.