A sterling silver vinegar and oil set by Hendrik Forster 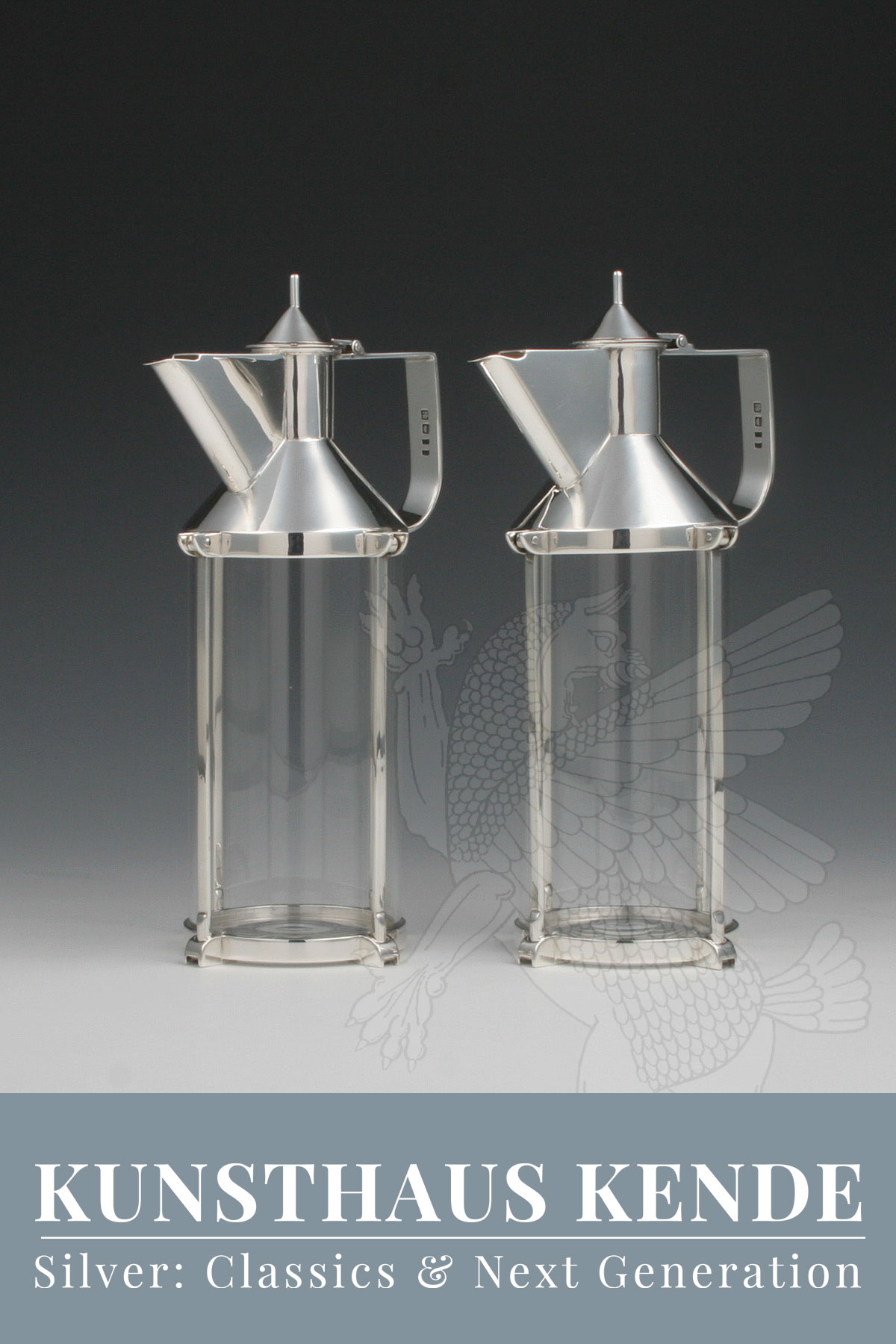 The cylindrical glass insert enclosed by sterling silver mounts and standing on a smooth ring. The upper side shaped as an inverted funnel which merges into the narrow neck to which the handle is attached to the back as well as the triangular spout to the front and closed by the conical lid to the top. The removable base fixed by hinged struts which enclose the glass insert that can be detached for cleaning. The set also comes with a separate replacement glass.
Exceptional modern set for vinegar and oil in sterling silver, executed by one of Australia’s most important silversmiths of the 21st century.

Hendrik Forster, born in Munich in 1947, moved to Australia in 1973 after gaining his master silversmithing qualification, settling in Nungurner in the state of Victoria. Hendrik Forster has not only been an important silversmith but has also had a great influence on the young generation of silversmiths in Australia through his teaching.
His outstanding sense of form, his brilliant skill in the execution of his work, coupled with his talent for finding unusual technical solutions, make him one of the most important representatives of modern Australian silversmithing. It is therefore not surprising that Forster received almost all important commissions from the Australian national church for ecclesiastical silver as well as from the Australian state for the design and realisation of state gifts. Two commissions that deserve special mention in this context are the gift from the Australian State for the wedding of Prince Charles and Diana in 1981 (a set of 20 sterling silver place plates in a blackwood acacia box with silver mounts) and the gift for Crown prince Naruhito of Japan and Masako Owada for their wedding in 1995 (a silver coffee service on a tray).
The set was shown as part of a special exhibition at the Munich City Museum. Hendrik Forster’s objects in silver can be found as outstanding examples of contemporary silversmithing in numerous private and public museums such as the National Gallery of Australia (Canberra), the National Gallery of Victoria (Melbourne) and the Hamilton Art Gallery (Hamilton). Hendrik Forster was also involved in a reconstruction project of St Patrick’s Cathedral in Parramatta, for which he designed 68 objects for the liturgy (for more on this project see here). Today, Forster appears only occasionally as a silversmith and in the meantime also achieved recognition as a sculptor.