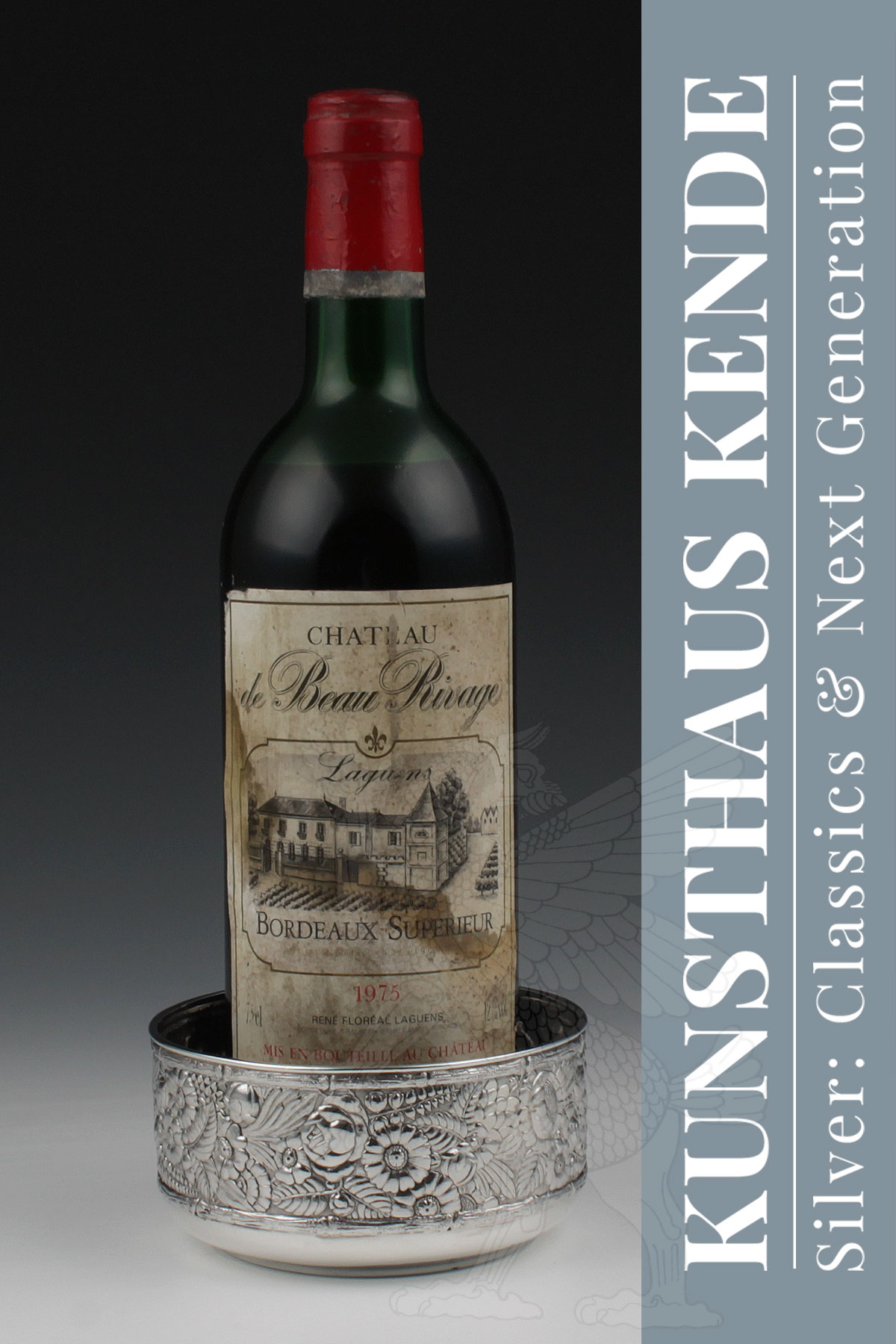 The circular wall decorated on all sides with embossed floral decoration on a matted ground, terminated by bamboo branches to the top and the bottom.
Exceptional and rare work of the Aesthetic Style in excellent condition.

The beginnings of Gorham Silver

If, due to its history, North America cannot look back on a tradition in the production of silverware that has grown over centuries like, for example, Great Britain, France or Germany, a number of silver factories were founded in the United States, particularly from the 19th century onwards, which produced outstandingly good work in silver. Among the most important manufacturers of silverware, besides Tiffany, is the Gorham Manufacturing Company, which was founded in 1831 in Providence, Rhode Island, by Jabez Gorham and Henry Webster. Initially founded as a small company whose portfolio consisted of buttons, thimbles and combs, the company expanded its production to hollowware such as tea sets, candelabras, bowls and trays after Gorham’s son John took over the management in the late 1840s.
This development was a consequence of the US tariff policy, in that in 1842 the USA imposed particularly high import duties on the products of the large silversmiths, thus bringing the import of foreign silverware to a practical end.

The Rise and Fall of Gorham Manufacturing Company

John Gorham was extremely committed as a visionary managing director and turned the small company into a world-famous brand. On previous trips to Europe, John Gorham had taken the opportunity to visit the studios of European silver factories. Upon his return, he began to incorporate their silversmithing techniques into his Rhode Island workshop, expanding the premises and also having a chasing press installed. In order to incorporate the Old World style even more into Gorham’s designs, he also specifically recruited European designers such as George Wilkinson (1819-1894). Gorham’s breakthrough came with the commissioning of silver flatware and a coffee tea service for the White House by First Lady Mary Todd Lincoln in 1859. The coffee tea service later became the property of the National Museum of American History, where it still remains today. Another milestone for the company was the commissioning of a “Century Vase” by the 18th President of the United States Ulysses S. Grant in 1875. The vase weighed almost 2000 ounces (approx. 62.2 kg) and was commissioned on the occasion of the centenary of the United States.
In the period around 1880, Gorham finally succeeded in meeting the taste of the time with outstandingly elegant designs that combined European Art Nouveau with designs of the Aesthetic Style and Japanese decorative elements. Gorham’s silverware of this period is among the finest available in the United States, such as this bottle coaster. Highly decorative works in mixed-metal (objects that impressively combined silver, bronze and copper) further established the company’s reputation as a manufacturer of exclusive luxury wares. The silverworks were sold in the company’s own boutiques in major cities such as New York and Los Angeles and enjoyed great popularity among the upper classes.
The company’s success continued in the 20th century with highly elegant, ornamental works of typical American Art Deco style, which were realised under Erik Magnussen. The significant decline in silver tableware in the post-World War II period led to Gorham being sold to Textron, a Providence-based industrial conglomerate, in 1967. The company merged with Lenox Holdings in 2005, which went bankrupt in 2009, ending Gorham’s 178-year history.