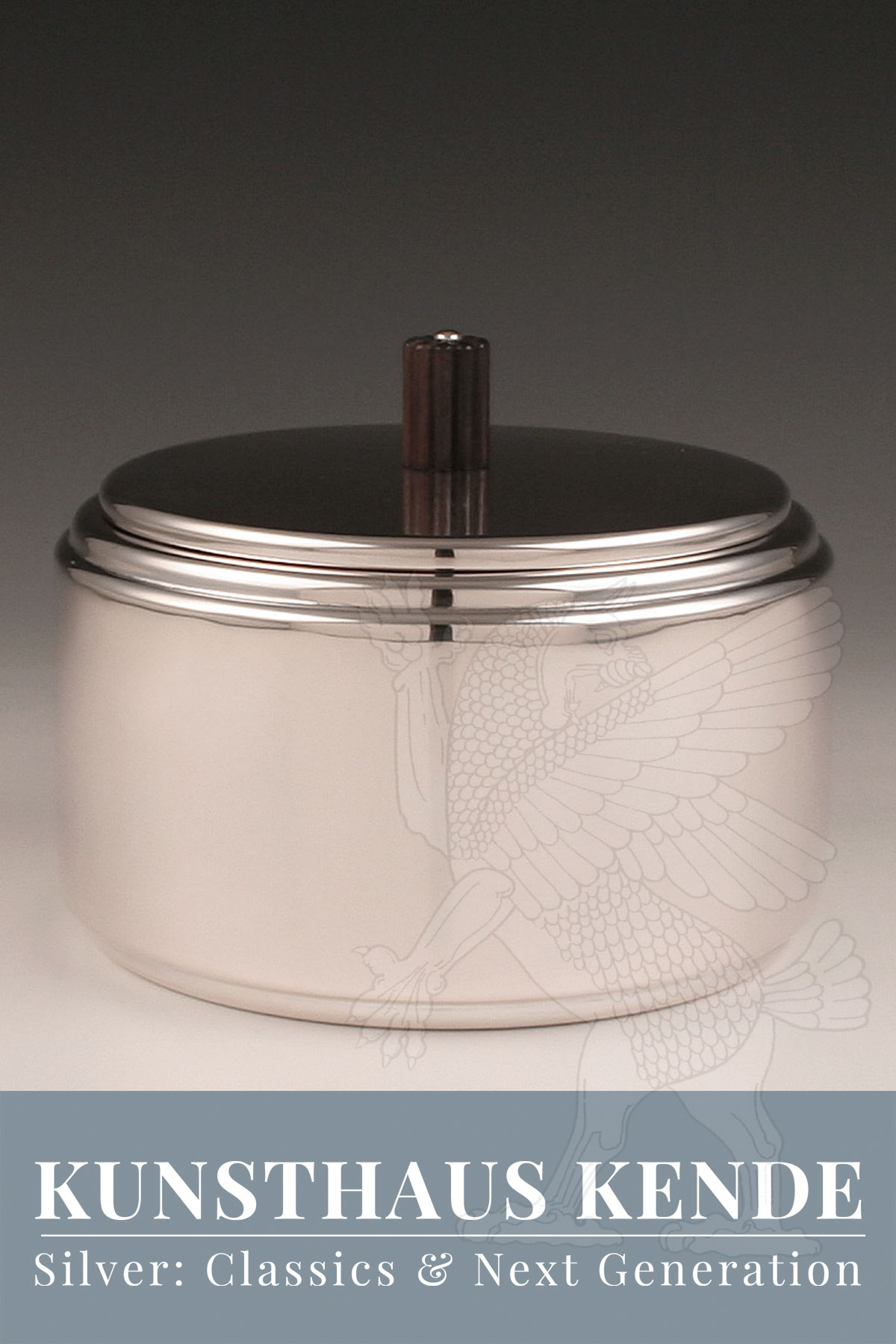 Cylindrical, unembellished body on a flat base, the edges stepped at the top and bottom. The flat lid is crowned by an elongated, vertically carved knob in tropical wood (probably rosewood).
Beautifully shaped and, despite its age, extremely modern looking work by one of the most important female silversmiths and designers of this era besides Emmy Roth and Paula Straus. This biscuit barrel forms part of a series of different vessel shapes that the artist designed for the Zilverfabriek Voorschoten, in which she varies the basic shape – cylindrical body with stepped profiled edge – by adding additive elements such as spout, handle or lid, thus creating a vessel shape of lasting modernity that can be produced industrially. Cf. her contemporary tea service shown in : FrauenSilber. Paula Straus, Emmy Roth & Co. Silberschmiedinnen der Bauhauszeit. Exhibition Cat. Badisches Landesmuseum Karlsruhe 2011, Fig. p. 120f.

Christa Ehrlich – famous designer for applied arts
Christa Ehrlich studied at the Wiener Kunstgewerbeschule (Vienna School of Applied Arts) from 1920/21, initially under Michael Powolny, where she focused on the design of ceramics and later moved on to the architecture class where she studied under Josef Hoffmann until 1925. Afterwards she became Hoffmann’s assistant in his architectural office and as her first important commission she designed the showcases in the Austrian pavilion designed by Hoffmann at the World Exhibition in Paris in 1925 and in 1927 the Austrian section to be designed by Hoffman again at the exhibition “European Arts and Crafts” at the Grassimuseum in Leipzig.  At this exhibition she was discovered as an artist by Carel S. Begeer, the head of the Dutch department at this exhibition and director of the “Koninklijke Nederlandsche Edelmetaalbedrijven” (KNEB) [= Royal Dutch Precious Metal Companies] and was recruited as a designer for the Zilverfabriek Voorschoten, a subsidiary of KNEB. In 1927, at the age of 24, she took up her position and in the same year she designed the iconic vessel shape, which was initially produced as a three-piece tea service and was extended to include a coffee pot, tea caddy and biscuit barrel (with and without support plate). The biscuit barrel presented here formed also part of this series and is therefore one of the first pieces of this decoration produced by Zilverfabriek Voorschoten.