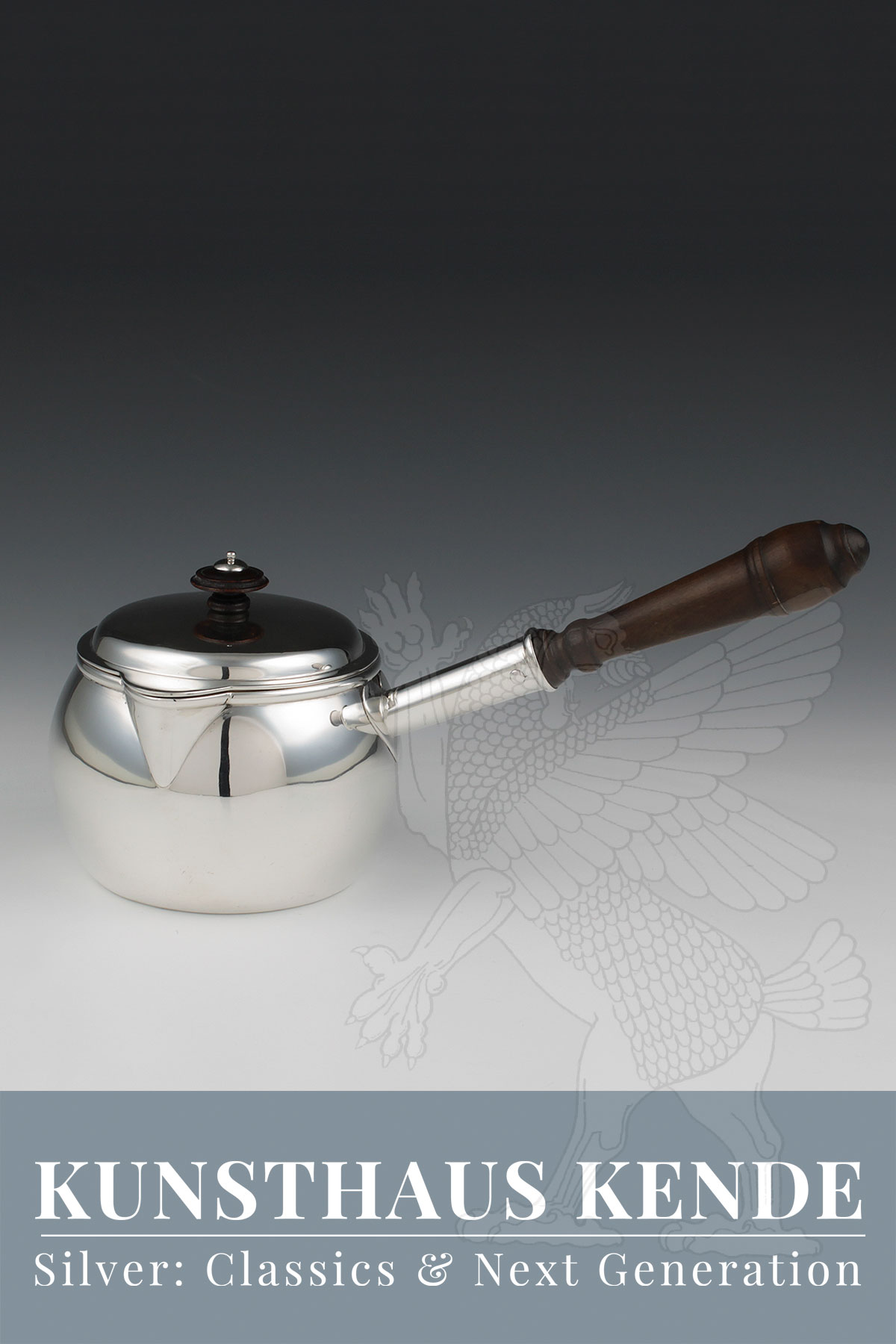 The slightly curved body topped by a corresponding lid which is crowned with a disc-shaped knob, which also covers the spout. The stem-shaped handle attached to the back.
An excellent sterling silver brandy pan or sauce pan of the late 18th century in its original condition.

Sauce pans of this type with a wooden stem as a handle appeared during the reign of Queen Anne in the early 18th century and were common until the first third of the 19th century. In Britain, besides the name Sauce Pan, Brandy Pan is also common as they were also used for heating cognac or brandy. The earliest models usually have a cylindrical or slightly concave body and examples are found both with or without a spout. From the middle of the 18th century, lids became common to keep the heat better, but they were often lost because they were loosely attached. The early examples are quite small in capacity, increasing in volume with the emergence of the lid. A special type of the brandy pans are the so-called skillets,  vessels standing on three legs which were often placed directly in the embers of the fireplace.

The company that would later become the famous English silversmiths Garrard’s of London was founded by George Wickes (1698-1761), who settled in Threadneedle Street in the City of London in 1722. In 1735, his silversmithy moved to Panton Street near Haymarket in central London, where they operated as goldsmiths and specialist dealers in jewellery and other luxury items for the English aristocracy. Wickes was a brilliant silversmith known for his fine work in Rococo style and won the favour of Frederick, Prince of Wales. Two of Wickes’ apprentices, John Parker and Edward Wakelin, acquired the business after Wickes retired in 1760. They were followed by John Wakelin and William Taylor in 1776. After the death of William Taylor, Robert Garrard became a partner in the business in 1792 and took it over in 1802. His sons Robert Garrard II, James and Sebastian followed him in running the business and traded as R., J. & S. Garrard (or Robert Garrard & Brothers) until his retirement in 1835.
During the reign of Queen Victoria, Garrard carried out many important major commissions, some of which were presented at the Great Exhibition of 1851 and the International Exhibition of 1862.