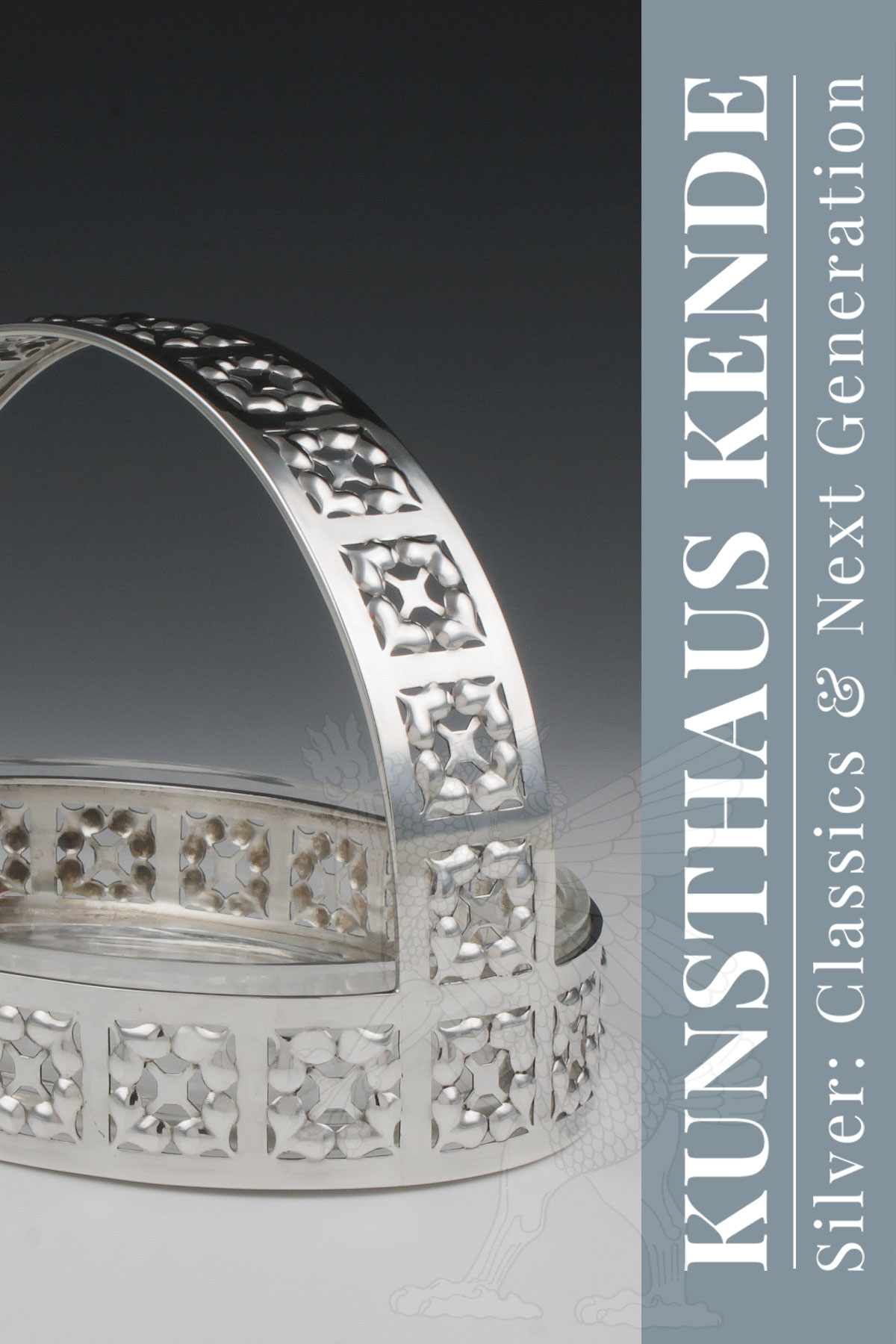 The oval shaped body standing on a flat base. The body decorated with square fields showing abstract, sculptural cloverleaf ornamentation with analogously decorated, curved handle. The silver frame holding the original glass liner of colourless glass.
An exceptional, rare work of the Wiener Werkstätte in excellent, original condition. Hallmarked on the underside with “WIENER WERKSTÄTTE”, Vienna Assay Office mark for 900 silver (Diana’s head in a hexagon as well as 2 and letter A), WW, designer’s monogram of Josef Hoffmann, rose mark and monogram of the executing silversmith “JH” in a circle.

According to the calculation book of the Wiener Werkstätte, only seven examples of this basket were made in 1910. The design drawing for the object is in the inventory of the MAK, Vienna under the number KI 12031-26 (see last illustration).

We would like to thank Dr Anne-Katrin Rossberg (MAK – Museum der angewandten Kunst, Vienna. Custodian for the Metal Collection and Wiener-Werkstätte Archive) for information on the object.
The MAK holds the estate of the Wiener Werkstätte and, in addition to executed works and contemporary photographs, also owns a large part of the design drawings.

Josef Hoffmann and Silver of the Wiener Werkstätte

Josef Hoffmann (Pirnitz, 1870 – Vienna, 1956) was a highly universal and productive architect and designer, whose relevance in art historical terms can only be compared to names as Henry van de Velde. Josef Hoffmann was a professor at the Vienna School of Applied Arts as well as a founding member of the Wiener Secession and later the Wiener Werkstätte.
The Wiener Werkstätte was an association of visual artists and founded in 1903 by Josef Hoffmann, Koloman Moser and the financier Fritz Waerndorfer. The aim of the company was to integrate art into the everyday life of the public. For this reason (comparable to the artists of the Arts & Crafts Movement) the Wiener Werkstätte devoted itself to the design and production of a comprehensive range of utilitarian and furnishing objects in the spirit of the “Gesamtkunstwerk”. The repertoire ranged from cutlery, bowls and trays, tea services, glass and porcelain to fabrics, wallpaper, curtains, furniture, jewellery and children’s toys. Characteristic of the Wiener Werkstätte’s creations was always high-quality craftsmanship, high aesthetic standards and individuality. Brass, silver-plated metal and silver were used in the production. Works by the Wiener Werkstätte in silver are less common, as these were already highly priced at the time. The company broke with the contemporary ornamental Art Nouveau style and produced groundbreaking modern designs – long before the terminology of “design” emerged.
With its artistically and qualitatively sophisticated products, the company enjoyed such success at times that it operated retail stores in New York, Zurich and Berlin, thus making the “Wiener Werkstätte” a brand of international renown. With the economic crisis of the interwar period and the increasing impoverishment of the middle class, the Wiener Werkstätte also got into economic difficulties, which led to its bankruptcy in 1932.

Josef Hoffmann was, along with Koloman Moser and Dagobert Peche, the most important designer of the Wiener Werkstätte and produced an impressive number of different designs. The “Kleeblatt gebuckelt” (in english “cloverleaf”; in german speaking areas also known as “Kleeblattmuster” or “Kleeblattdekor”) was one of the earliest designs of the Wiener Werkstätte. There´s evidence that the design goes back to Koloman Moser. The first works of this pattern emerged in April 1906. Josef Hoffmann and Koloman Moser varied the design with great refinement in the following years and produced various types of vessels and objects in the “Kleeblattmuster”. Despite the great success of the “Kleeblatt gebuckelt”, relatively few works in this design have survived today.