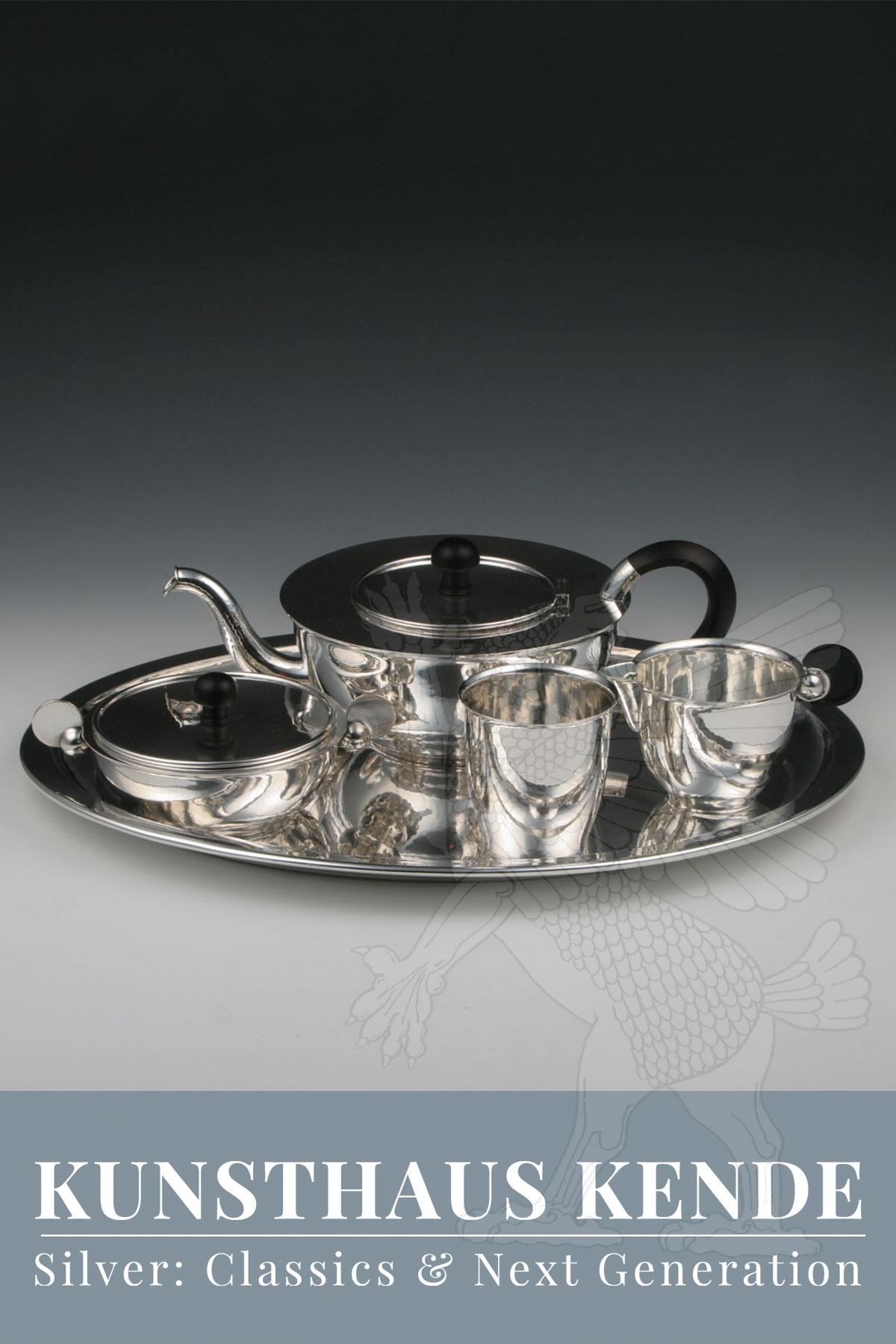 The circular bodies with a subtle martelé to their surface. All knobs as well as the handles of the the teapot and the milk jug made of ebony.
An extraordinary silver tea service with its original tray in outstanding condition and originally without any personal engraving. The set features its original spoon beaker – with german silver of a great rarity. All parts show the dutch import marks for forein silver which indicate that the set has been made for export and which explains the absence of the crown and half-moon as guarantee hallmarks for silver as well as the vessel for teaspoons, which is unusual for the German region and which was far more in common on Dutch silver tea sets. The tea service has been shown in 1927 on the exhibition “Europäisches Kunsthandwerk” [= “European Decorative Arts”] in Leipzig 1927 and is shown in parts on a contemporar photography in: FrauenSilber. Paula Straus, Emmy Roth & Co. Silberschmiedinnen der Bauhauszeit. Exhibition catalogue of the Badisches Landesmuseum Karlsruhe 2011, Fig. p. 42.
Several artworks by Paula Straus can be found in the Bröhan Museum, Berlin and the Württembergisches Landesmuseum, Stuttgart.

Important german avant-garde goldsmith and designer of jewellery, silverware and flatware in Stuttgart.
Trained at the Kunstgewerbeschule Stuttgart (School of Applied Arts, Stuttgart) until 1921, Paula Straus was a master student in the metal class taught by Paul Haustein, who also designed silverware for Bruckmann & Söhne and the Württembergische Metallwarenfabrik Geislingen (WMF). The collaboration with Paul Haustein as well as with the department for glass and stone cutting at the Kunstgewerbeschule under Wilhelm von Eiff continued after her graduation. From 1924/25 until the early 1930s, Paula Straus worked as a designer of silverware for Bruckmann & Söhne in Heilbronn, where she designed an impressive variety of silverware, especially silver tea sets, silver hollowware and silver cutlery as well as ecclesiastical silver for both Christian and Jewish liturgy. Together with Josef M. Lock, she was in charge of the studio for ecclesiastical silver at Bruckmann & Söhne from 1925-30. In 1929, Paula Straus received a teaching assignment at the Staatliche Hochschule für Handwerk und Baukunst in Weimar (State College for Crafts and Architecture). From 1933 she worked as a master goldsmith at WMF. Two years later, Paula Straus decided to become self-employed and moved to Stuttgart in 1935, where she founded a jewellery shop that was closed by the National Socialists in 1939. In reaction to the Night of Broken Glass of 9-10 November 1938, Paula Straus made numerous attempts to emigrate and negotiated with the Zilverfabriek Voorschoten in the Netherlands, where her fellow artist Christa Ehrlich held a prominent position as a designer and for whom Emmy Roth also conceived numerous designs for silverware. From this period, individual photographs of Paula Straus’ designs for silverware, silver cutlery as well as tea services have survived, summarised in an application folder, the authorship of which would remain unknown today. After the expropriation of her properties in Stuttgart and Gundelfingen (1939/40), she had to give up her work as a goldsmith and silversmith for good and instead take up a position as a kitchen assistant at the Jewish old people’s home in Buttenhausen near Münsingen. In 1941, she became the manager of the Jewish nursing home in Haigerloch, which she had to run together with a kitchen assistant under the most adverse circumstances.
On 2nd August 1942, Paula Straus was deported to Theresienstadt together with her mother and in January 1943 she was transferred to Auschwitz, where she was murdered on 10th February.
Paula Straus’s designs for silverware and silver cutlery were so modern and progressive that she managed, on the one hand, to formally anticipate the work of the 1950s and, on the other hand, to refer back to the silver objects of the 18th century. A very thoughtful use of ornamentation often softens the austerity of her designs and takes away their monumental character. Under more favourable conditions, the artistic potential of Paula Straus would have made her an internationally respected artist, who would not have had to shy away from a comparison with Emile Lettré, Jean Emile Puiforcat or Georg Jensen in any way.