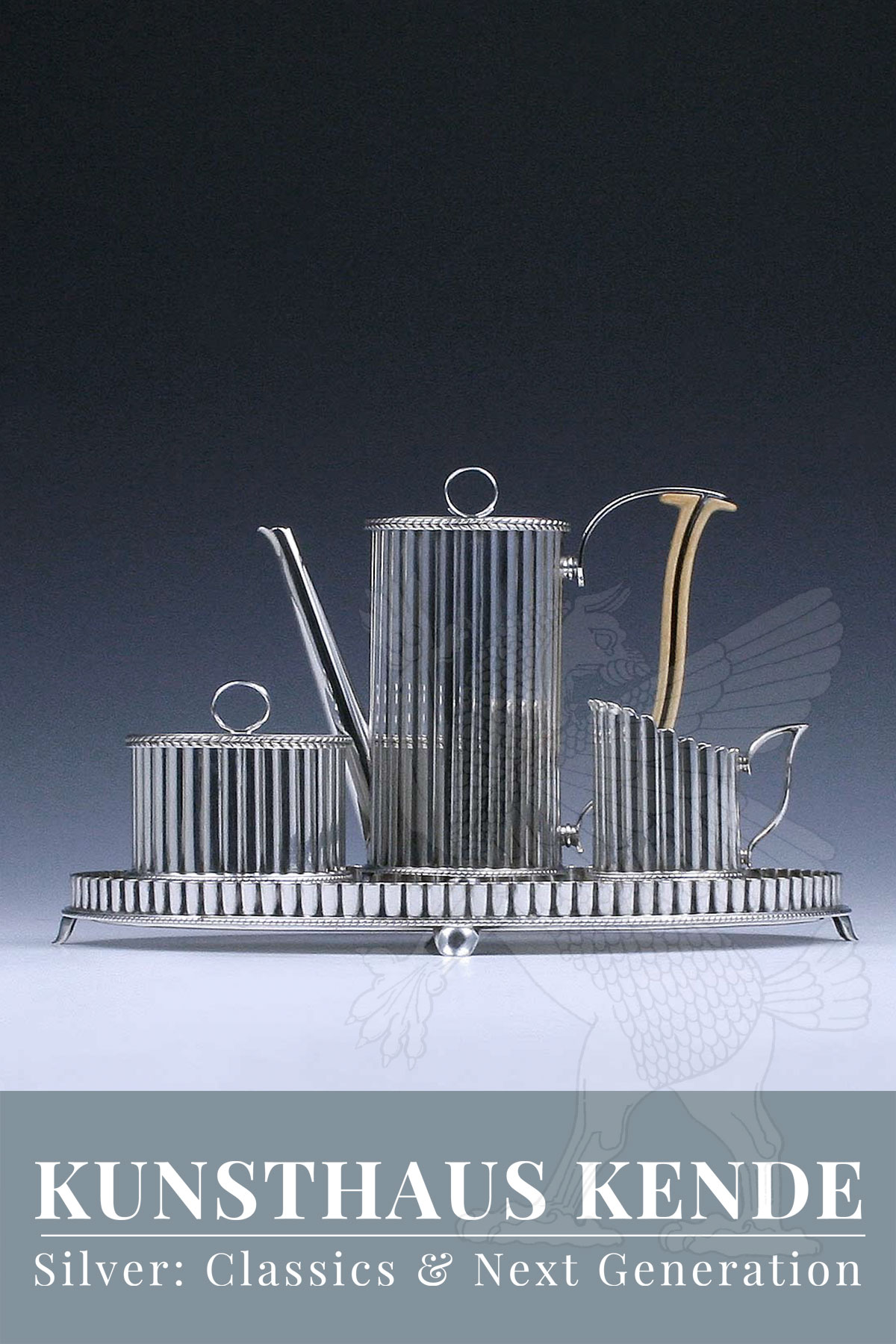 An important 800 grade silver mocha service on tray,
designed by Josef Hoffmann for the “Wiener Werkstätte”,
executed by Bruckmann & Söhne, Heilbronn circa 1926

The cylindrical, ribbed bodies standing on four feet. The lid of the mocha pot hinged to he back, the lid of the sugar box detachable.  Both lids are terminated by a looped knob. The tray with narrow edges to the inner side to hold a glass plate. The handle of the mocha pot provided with ivory mounts.

The absence of the eagle maker´s mark of Bruckmann & Söhne as well as of the model number indicate that the present mocha service hasn´t been intended for regular production yet. This mocha service was designed in 1926 for the Wiener Werkstätte. This service is extremly rare and was produced in a very small quantity only. Until a few years only the design drawing was known. The drawing is illustrated in: Städtische Museen Heilbronn (ed.) “Silber aus Heilbronn für die Welt – P. Bruckmann & Söhne (1805 – 1973)”, Heilbronn 2001. P. 74, Fig. 24. This museum quality mocha service is a good gauge of silver and in excllent presentation condition. It has been created with great sophistication both in artistic respect and in constructional details: The glass plate to the tray has among pragmatical reasons in respect to the protective function also a stylistic effect, as the pieces of the service seem to hover above the tray. The vertical ribbed bodies give a certain lightness to the set.
An another detail which underlines the great inventiveness of Josef Hoffmann being typical for him as one of the most important designers of the 20th century is the combination of decorative elements with the practical aspect of the use: The ivory mounts to both sides of the handle not only accentuate the elegant line but also have the function as heat stoppers to prevent the user from excessive heating.
In the late 1920s, the Wiener Werkstätte had to struggle with great financial difficulties as a result of the global economic recession and was on the verge of bankruptcy as early as 1926, which was temporarily averted by the sale of designs, among other measures. It was probably during this period that Bruckmann & Söhne acquired the design for the present service. With regard to individual designs for Bruckmann & Söhne, Hoffmann’s authorship has been clearly proven by research, so that in our opinion the present service can also be attributed to Hoffmann. The outstanding elegance of the design and its high practicality support our assumption, as does the entry in Bruckmann’s documents in which the Wiener Werkstätte is named as the place of origin of the design drawing. The artists Dagobert Peche, Koloman Moser, Otto Prutscher and Josef Hoffmann were among those who designed metal and silver works for the Wiener Werkstätte. From a stylistic point of view, the three first-named artists do not come into question as designers, as their stylistic signature mostly differed significantly from that of Hoffmann. Moreover, there are documented designs by Josef Hoffmann that are close to those of the present mocha service. Furthermore, the vertical ribbing of the corpus is a significant stylistic feature that can be found repeatedly in design drawings for hollowware by Josef Hoffmann.