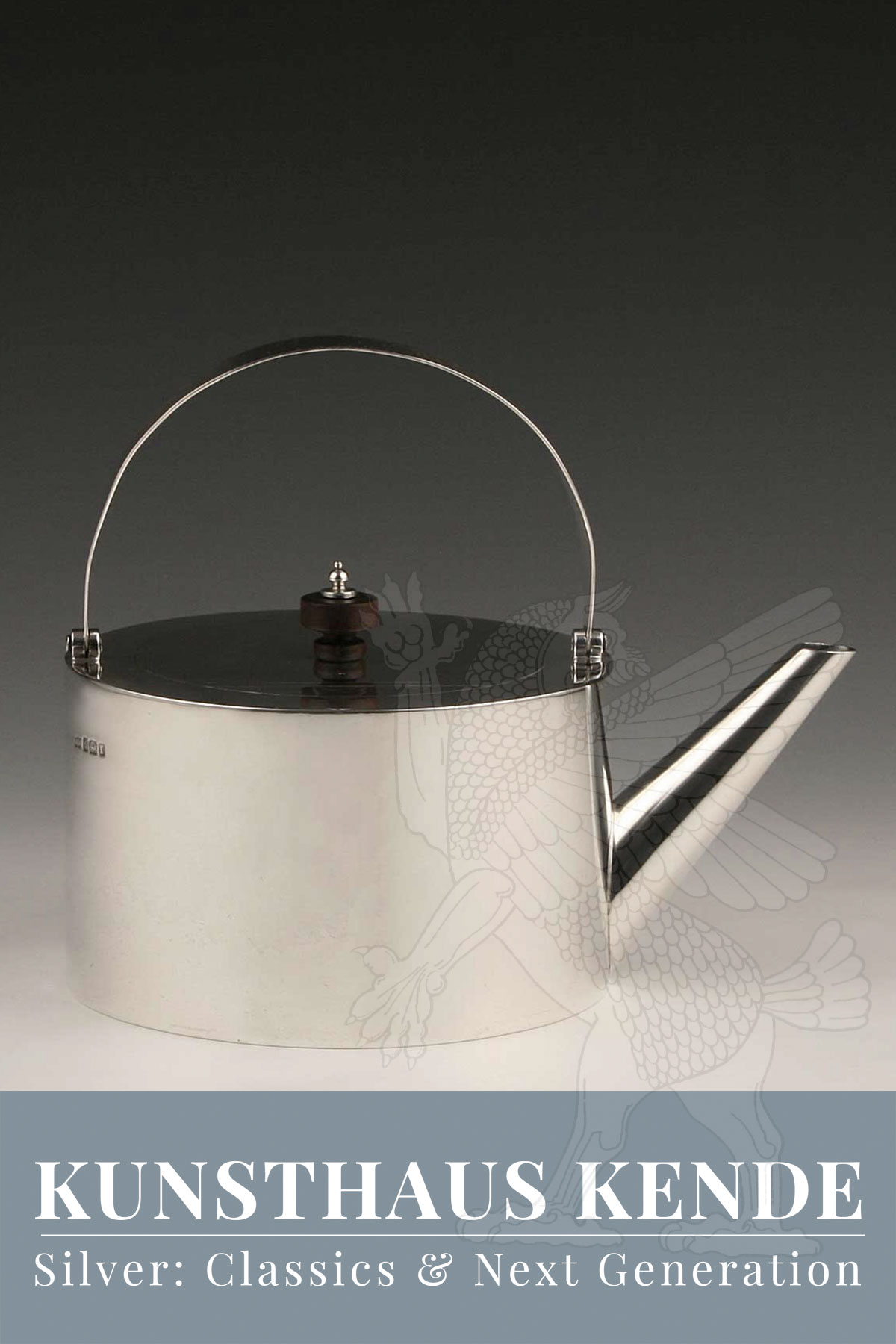 Of circular shape in cross section, with a plain and linear body. The flush hinged lid with central, dark wooden knob and with a tapering spout to the front. The semicircular handle attached to the upper part´s rim with two hinges. Fully hallmarked to the back as well as with the trademark of Mappin & Webb to the base. French import marks to the rim of the lid.
A very delightful sterling silver teapot in Arts & Crafts-style of exceptional quality and excellent presentation condition. The simple, plain design appears modern still today and obviously shows a close proximity to the designs of Christopher Dresser.
18.5 cm / 7.28″ length, 12.7 cm / 5″ diameter, 7.7 cm / 3.03″ tall (to the rim); 450.8 g / 14.49 oz

Mappin & Webb is one of the oldest manufacturers of English silver and has made a name for itself with high-quality silverware and silver flatware over the centuries.
Founded in 1775 by Jonathan Mappin as a workshop for silver cutlery in Sheffield, the silversmithy soon became well-known for its high-quality cutlery. In 1780, Jonathan Mappin was given the Freedom of the Cutlers Company. The „Cutlers Company of Hallamshire“ was founded in 1624 as an institution to exercise jurisdiction over cutlery manufacturers in Sheffield and the surrounding area and to promote Sheffield as a location for expertise in the manufacture of cutlery. The business was continued by Jonathan Mappin’s son Joseph and later by his grandson, also named Joseph.
The greatest expansion, however, took place in the mid-19th century when Jonathan’s four great-grandchildren rebranded the company as Mappin Brothers Ltd. The company expanded internationally, received Royal Warrants and commissions to produce silverware from various royal houses in Europe and beyond followed soon. Despite the great success of the silversmithy, three of the managing brothers retired and devoted themselves to their own enterprises, only John Mappin continued to run the business. A few years later, John Mappin joined forces with his brother-in-law George Webb to form the silversmiths Mappin & Webb, which is still well-known today.